Basilica minor with a crying icon 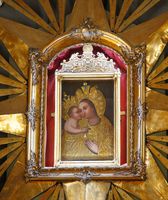 Basilica Minor of The Nativity of the Virgin Mary in Vranov nad Topľou is the oldest historical monument in the town from 1580. The original church was elevated to a basilica minor in 2008. It has a beautiful interior decoration, which is carried in Baroque style. Wall frescoes, statues of saints, or a rare liturgical set commemorate the ancient past. The altars and the pulpit are decorated with valuable crafts and are a rare example of Baroque sculpture.

The main altar is dedicated to the Virgin Mary. Side altars are dedicated to St. Paul the Hermit and St. Pope Clement of Rome. Another altar is located on the north side of the building closer to the entrance to the shipyard and is dedicated to St. Ján Nepomucký, a martyr of the confessional secret. The great respect of the Vranov pavilions for this saint is also confirmed by the reliquary with its remains in the interior, as well as the sculptures in the exterior of the church. Inside the basilica, you can also see frescoes painted by the important Czech Baroque painter J. L. Kracker.

This historical monument also became known thanks to a miraculous event that was to take place in this region. In the 18th century, a rare historical icon of the Virgin Mary was transferred to the church, which was to shed bloody tears in front of the public. It happened on August 27 and September 2, 1708. Ten years later, a fire broke out in the church, but the painting remained intact. Its author is still unknown. The work is made on canvas with oil paints and represents the mother of God, who holds the child on his right forearm. After more than 300 years, the icon got the name "the image of the Virgin Mary of Vranov".

The monastery is connected to the church. Its donor was Maria Esterhazy. In 1718, the mentioned fire also hit this monastery. Its original Baroque facade was later remodeled in the neoclassical style and was a portal with two columns that topped the Corinthian sandstone heads. The walls of the monastery were covered with frescoes made by J. L. Kracker. To this day, only one vaulted painting above the monastery staircase has been preserved, depicting St. Paul the Hermit ascends into heaven in a chariot towed by two lions in a sled.