In the village of Veľkrop in the Stropkov District, there is the largest cemetery in Slovakia from the period of the First World War. About 8662 soldiers of the Austro-Hungarian and Russian armies are buried there. Intensive combat activity took place near the village of Veľkrop, especially at the beginning of 1915. The war cemetery was created as a result of the war tragedies after the army left the area in the years 1916 to 1918. It is a national cultural monument. It was created in such a way that the remains of temporary graves from a wide area were exhumed and brought to this place.

The Beskydy Military History Club (MHC) became interested in the cemetery at a time when it was preparing a publication focused on mapping these places of worship in the northeastern part of Slovakia. Together with the village of Veľkrop, they decided to save this monument. The renovation took place from 2010 to 2018. Most of the work was performed by dozens of volunteers and enthusiasts not only from Slovakia but also from abroad.

Very few documents have been preserved from the period of the First World War. Based on the available ones, the members of MHC Beskydy found out, in addition to what the cemetery originally looked like, a few names of soldiers - about 11 who are buried in this place. They continue to search for other names.

An educational trail from the Greek Catholic temple, where it is possible to park a car, leads to the war cemetery, which is dominated by a central monument with crosses. The route, which is approximately two kilometers long, is lined with boards that inform the visitor about the course of the war in this area of northeastern Slovakia. The time it can pass is a little over an hour. 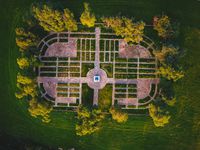